Restyling of an apartment in Brianza: explore the project

Apartment in Brianza: how wall paints can enhance a restyling project

The restyling project we introduce today concerns an apartment situated in the Brianza area, for which the restructuring involved not only a new layout, strongly desired by the client, but a fully-fledged restyling intervention to value the spaces.

With regard to the floor plan, the restructuring intervention concerned the daytime area which, as customary, was originally divided into the kitchen and the living room. In the new project these two environments – given that there was no reason for dividing them – were joined by demolishing the vertical partition between them.

As a result of this intervention, it was possible to:

On the other hand, there were no changes to the night-time area, which retained its original layout, since it was already appropriate from a planimetric and spatial perspective. 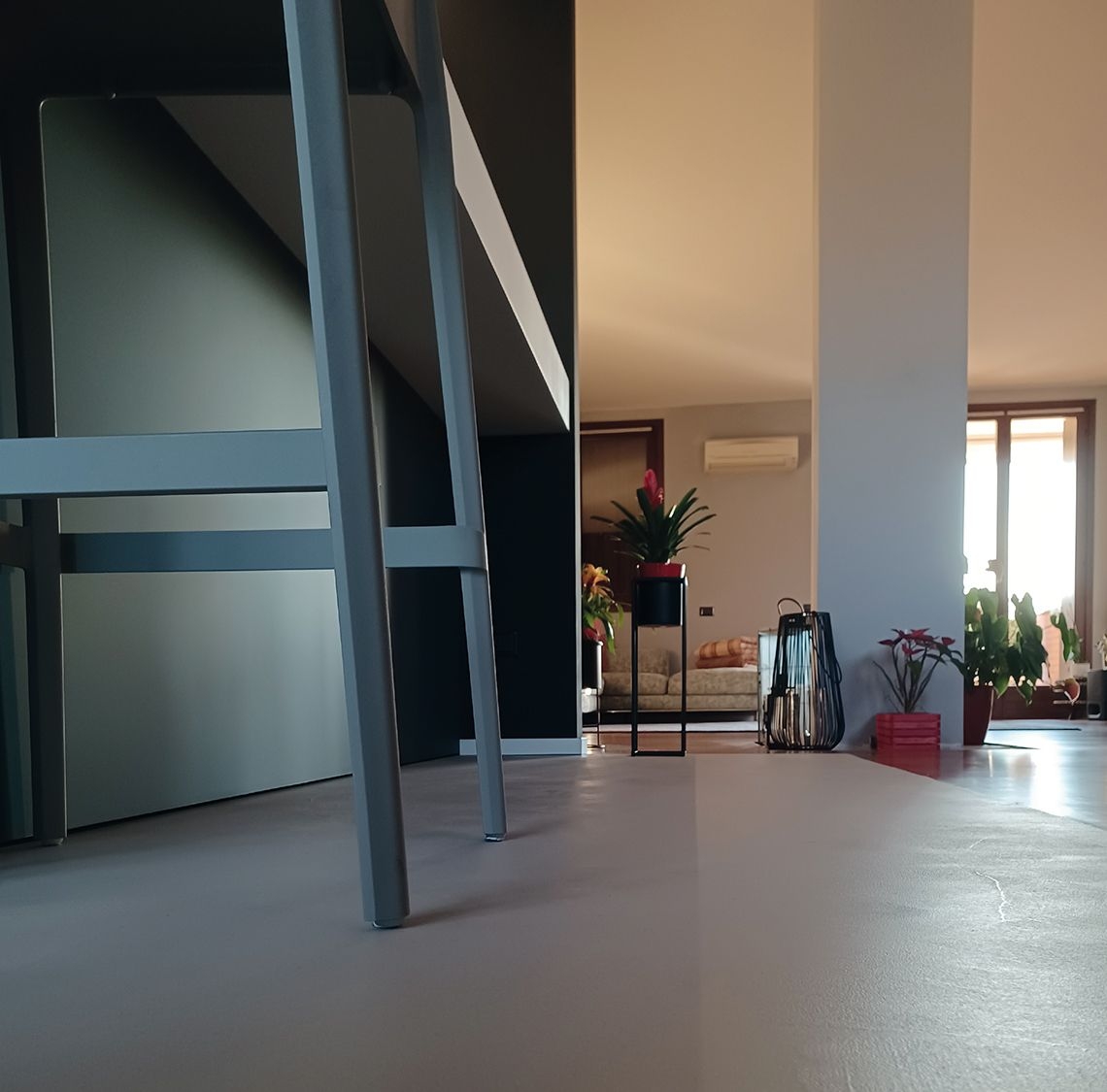 The finishes for valuing the new layout

Once the so-called “layout” was defined, the project focused on the finishes to be applied.

In similar contexts we often tend to add value (if worthwhile, of course) to the materials already present and enhance their characteristics by combining them with others. Moreover, in most cases bathrooms and kitchens are the environments requiring the most targeted and extensive interventions so as to make them more up-to-date and functional. 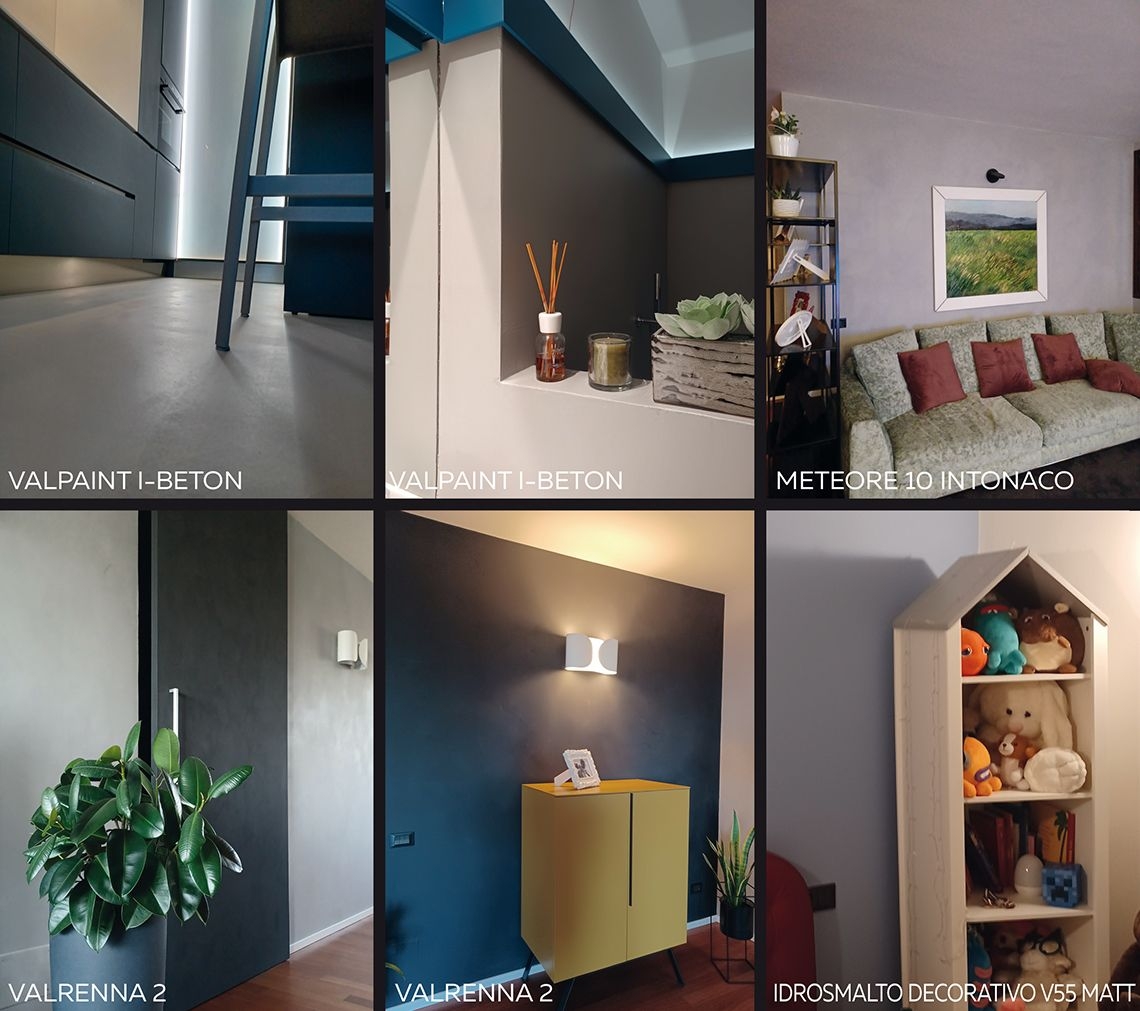 Restyling of the living zone

As mentioned previously, the vertical partition in the living zone was demolished to create a single unified living room-kitchen environment.

In the zone formerly used as a kitchen, the floor was covered with tiles that were still in good condition, but decidedly unsuited to the new design we had in mind. On the contrary, the wooden floor in the living room area – doussie wood with its typical reddish-brown hues, of superb quality and still in excellent condition – was fully attuned to the design philosophy.

As a result, different solutions were adopted, using different materials but all with a clear-cut character, for both the floors and the vertical surfaces.

VALPAINT, a leading company in the production of decorative paints and coatings, came up with some truly interesting solutions from a technical perspective but also, and above all, from an aesthetic point of view. 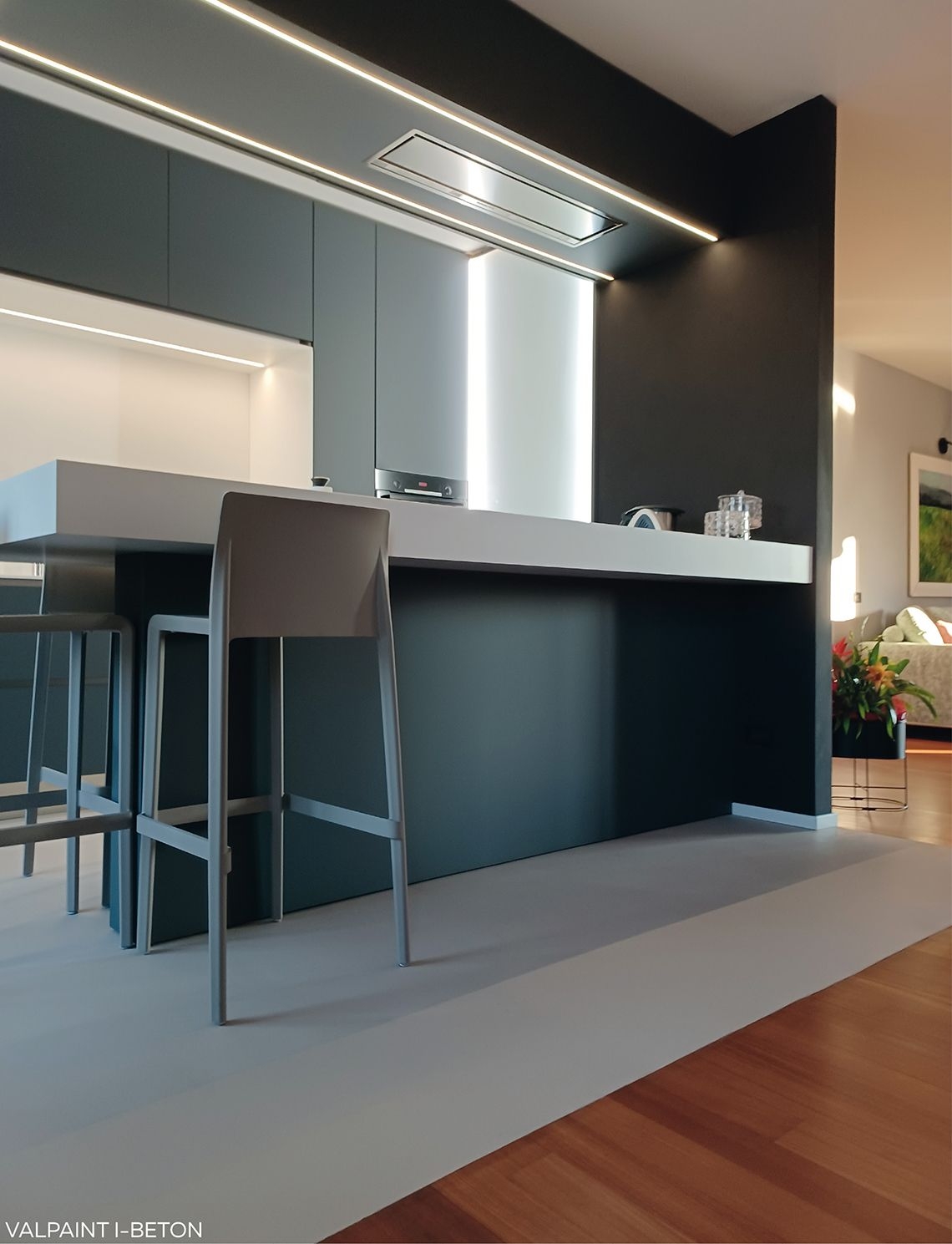 For the restyling of the floor in the former kitchen area, the choice fell on VALPAINT I-BETON, a decorative coating with micro-cement effect studied for being applied also on old tiles and particularly suited to environments where water and humidity are present.

The choice of this particular coating, with its distinctly urban connotation, allowed for creating a defined division – in terms of texture and colour – involving two different materials: the wooden surface and the “continuous surface” created with VALPAINT I-BETON. 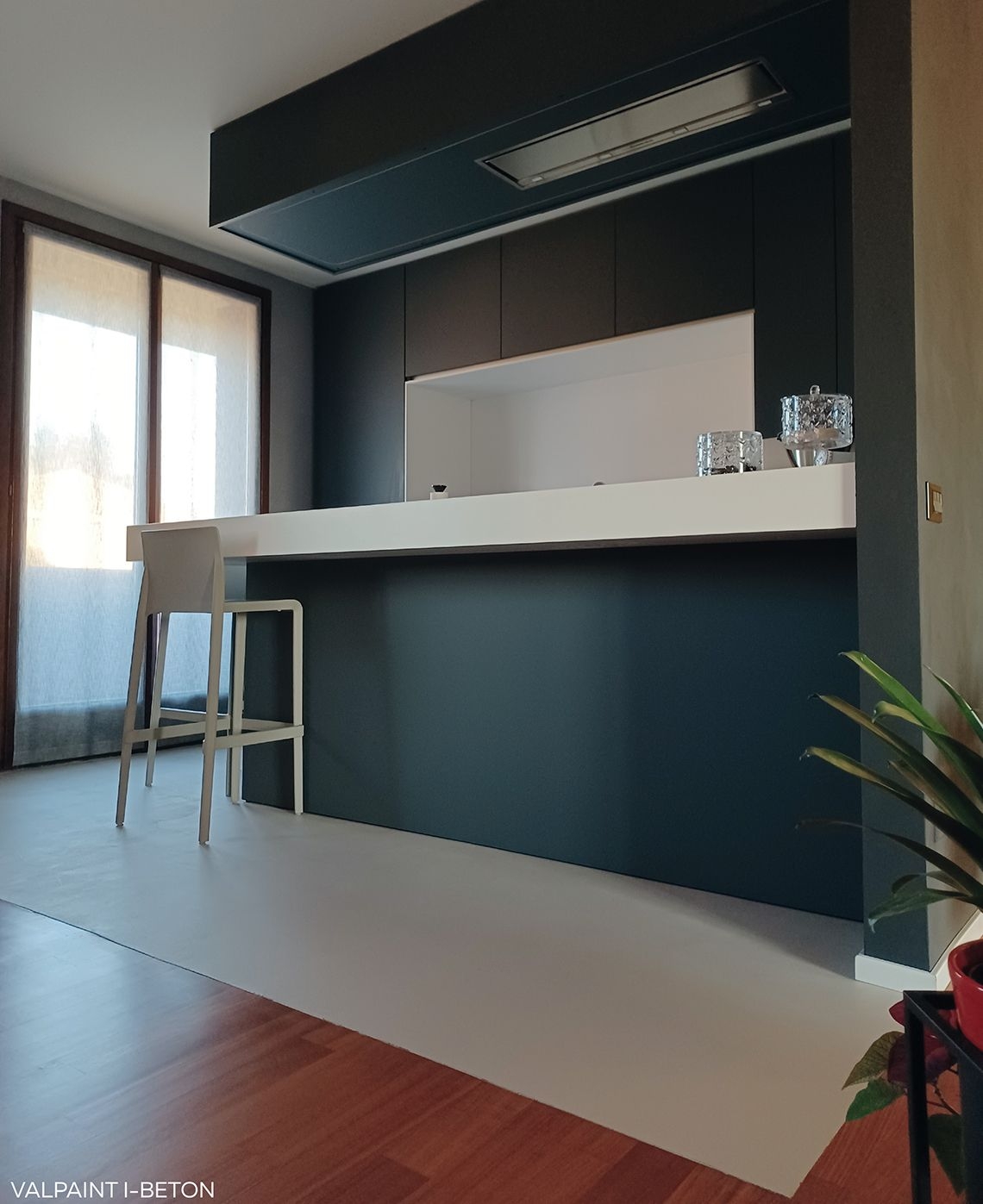 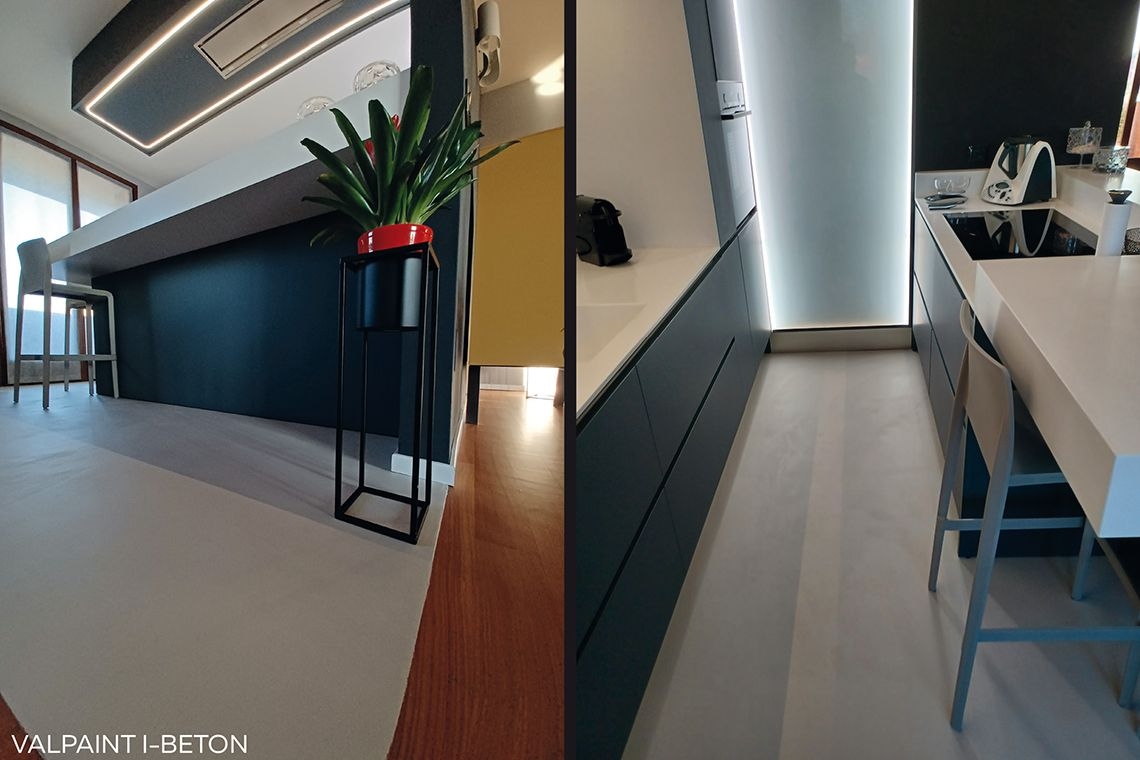 2) METEORE 10 INTONACO, a paint that replicates the effect of plaster

With the living zone being a single environment, dominated by the chromatic and textured balance of wood and by the VALPAINT I-BETON continuous surface, for the vertical partitions it was decided to use a coating with a minimal aesthetic impact: METEORE 10 INTONACO, in the light grey shade.

With its industrial-urban quality and dusty appearance, METEORE 10 INTONACO is a design-inspired solution that is highly suitable for expanding the large surfaces on which it is applied. 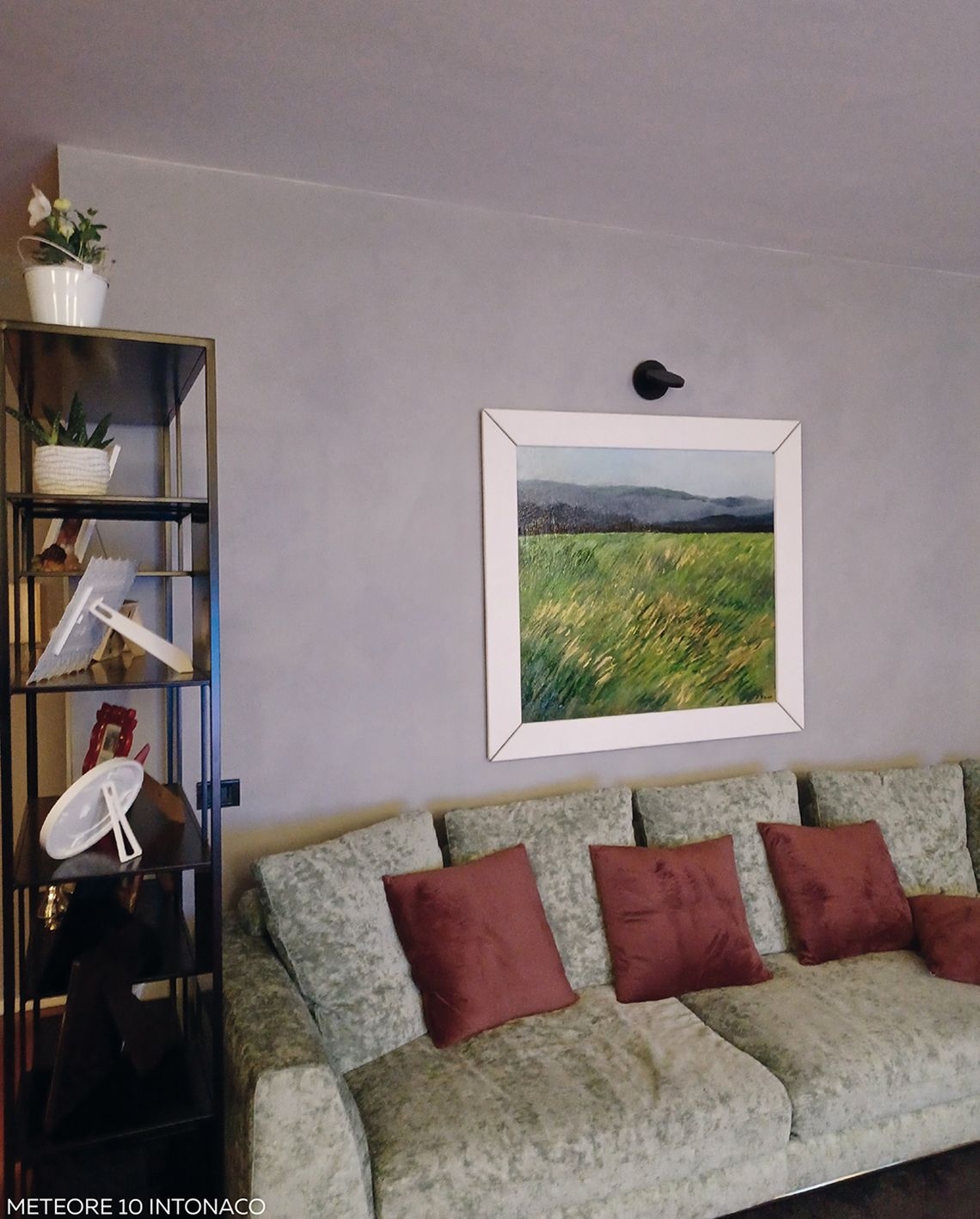 In this large environment, to emphasise the entrance zone, it was decided to apply another super VALPAINT product, namely VALRENNA 2, which produces a decorative effect characterised by a soft and refined tactile quality and a decidedly elegant appearance.

Applied in a very dark nuance, the product managed to emphasise and uniquely define the zone where it was applied as well as the large sliding door dividing the bedrooms from the living zone.

In the passageway, the METEORE 10 INTONACO textured coating was used to ensure chromatic consistency, in the same nuance chosen for the living zone (given that the connection between the two zones is interrupted only by the large sliding door). 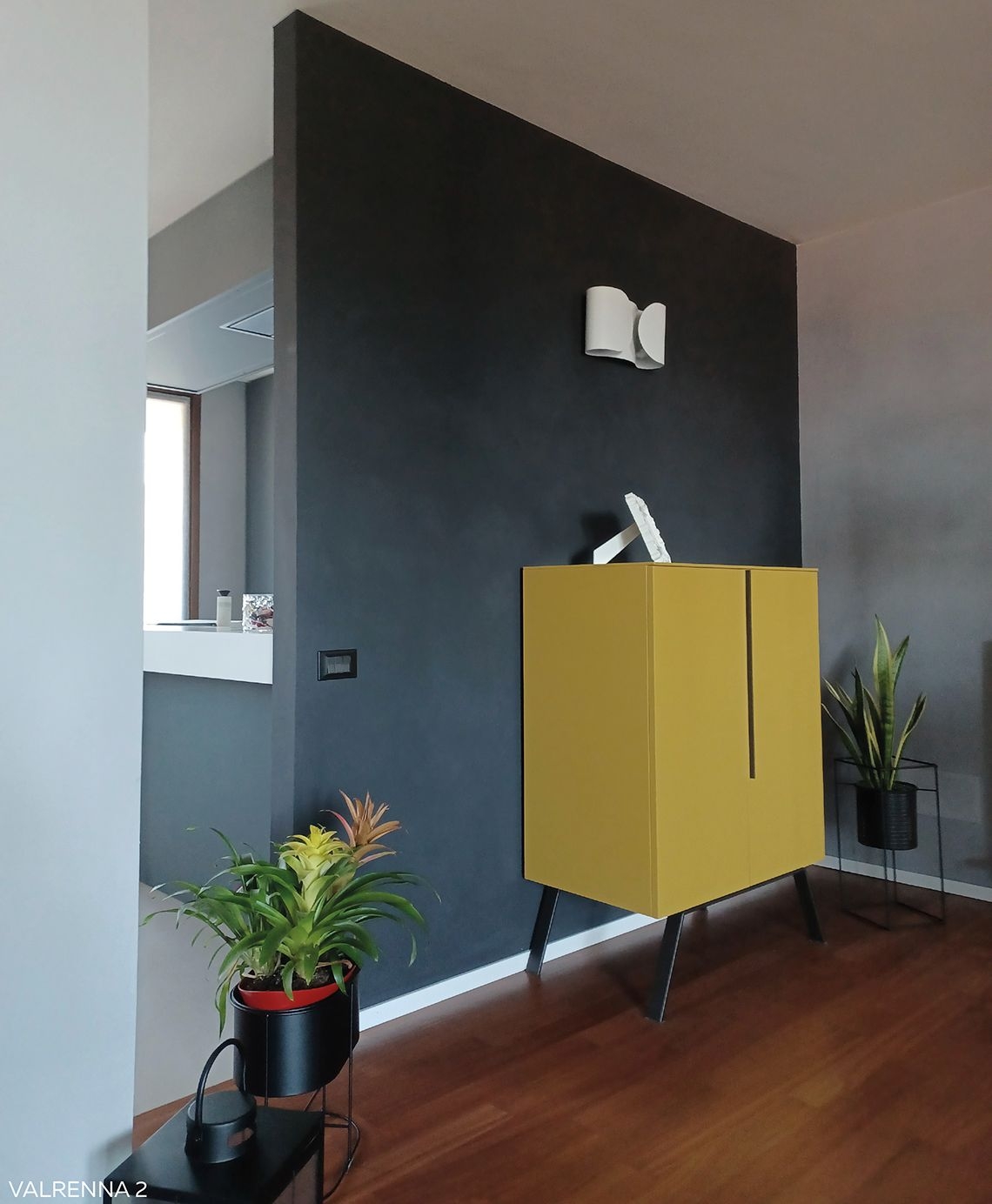 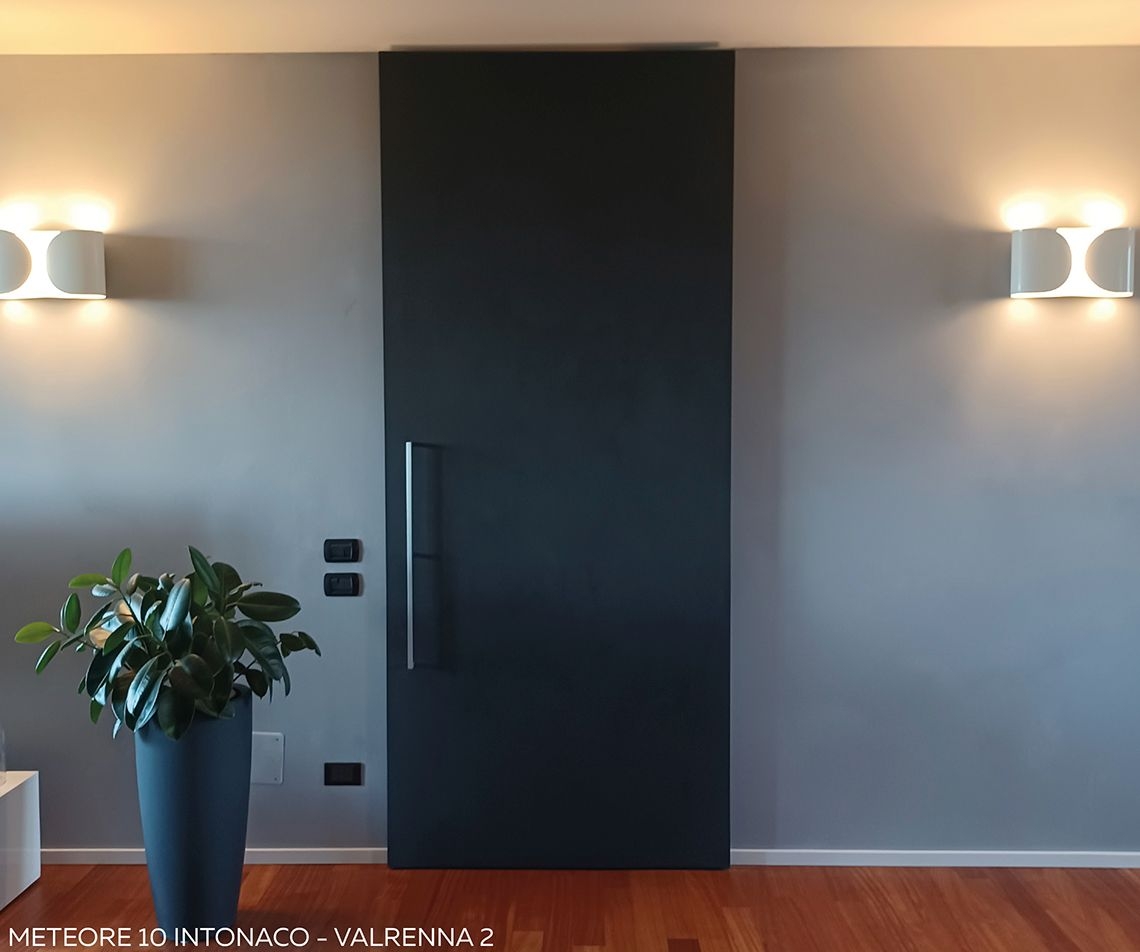 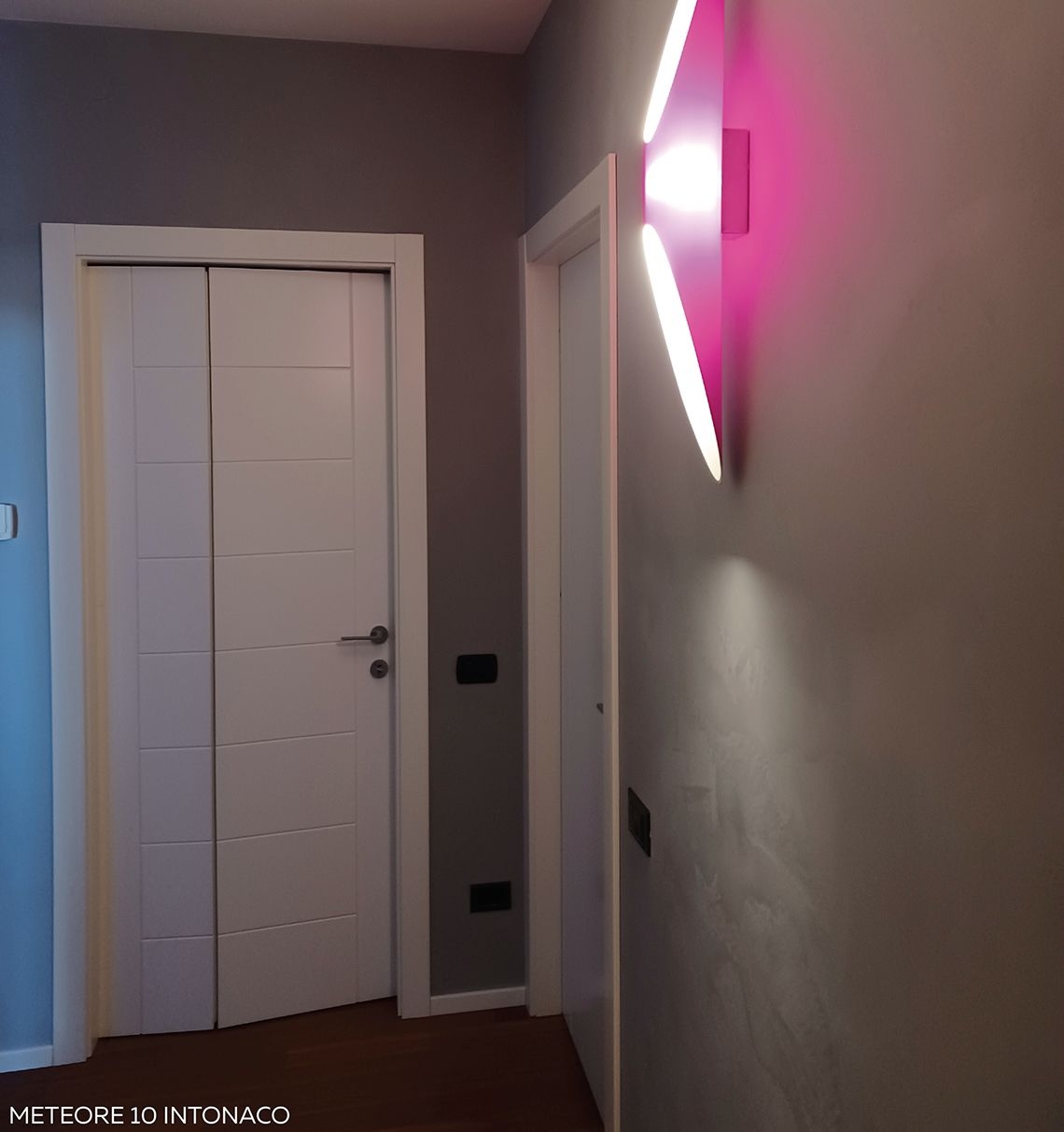 How to enhance the bedrooms using white

For the bedrooms we chose to stay traditional by using a solid colour, more specifically white. The only dash of colour was the dusty blue finish, with the presence of a small amount of glitter.

Even for simple solutions such as this one, VALPAINT was able to help both the client and the designer by proposing a DECORATIVE WATER-DILUTABLE ENAMEL, which is of a high technical standard but also eco-friendly.

IDROSMALTO VALPAINT, featured in two finishes, V55 MATT for the matt version, and V88 SATINÉ for the satin-finish version, contains a special sanitising agent in its formula that makes environments healthier and reduces indoor pollution to a minimum. 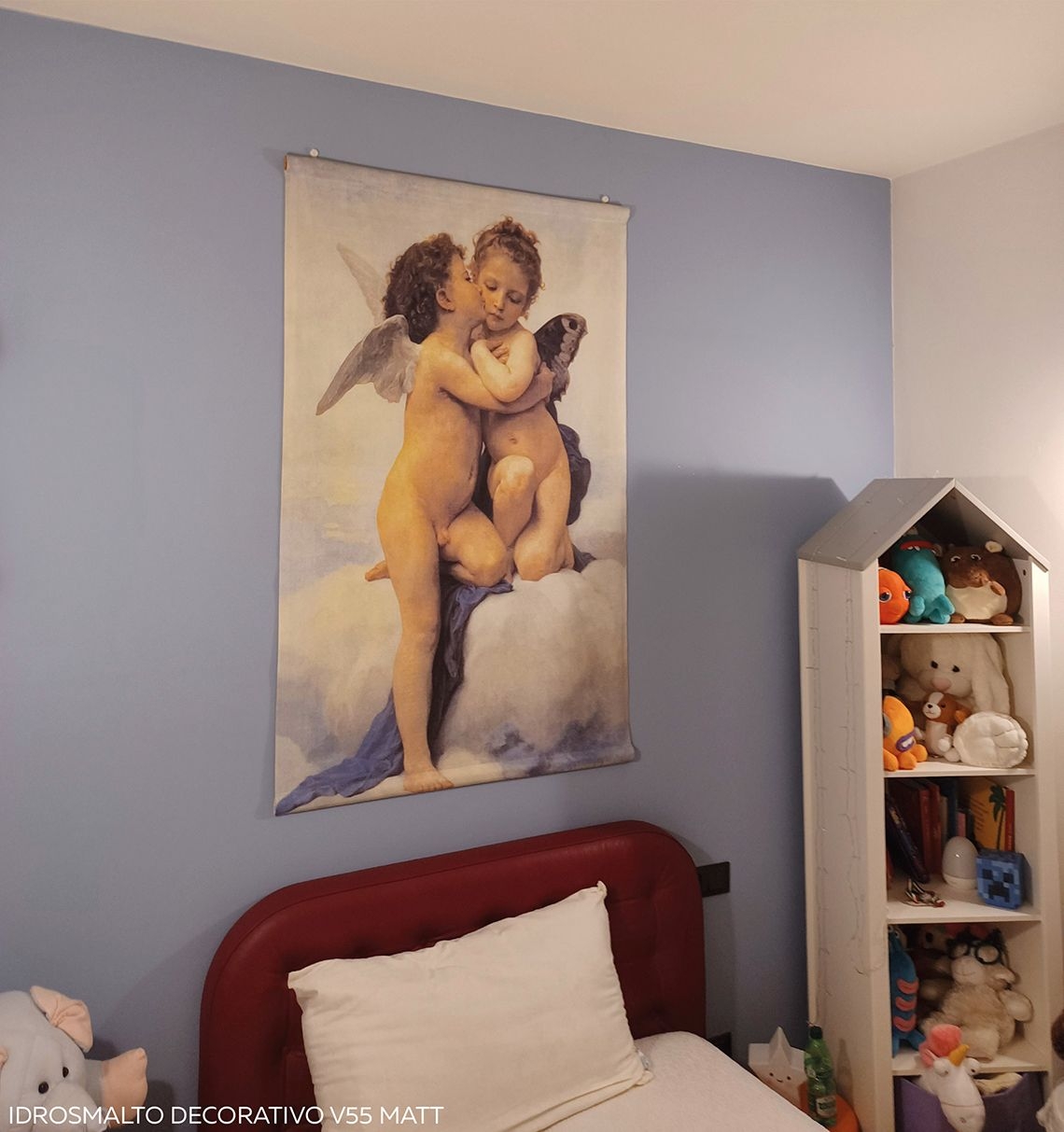 Solutions merging design and practicality for the bathroom environment

Both bathrooms in the apartment underwent a full restyling, involving the floors and vertical surfaces, as well as the nuances of the furnishings.

Initially, the walls and floors were lined with old tiles that looked decidedly outdated, so it was decided to replace them. There were two possible solutions: the removal and replacement of the ceramic tiles (a costly and far lengthier procedure) or the application on top of these surfaces of a coating capable of withstanding humidity.

It was thus decided to pick one of the VALPAINT decorative solutions, by choosing an appropriate decorative cycle that could be applied on old tiles but also in damp environments such as bathrooms.

The choice fell on VALPAINT I-BETON with micro-cement effect, in different nuances for the two bathrooms. This special finish produced two absolutely refined and modern bathroom environments, which made the old coatings just a thing of the past. Moreover, the various colours available for VALPAINT I-BETON made it possible to use a full range of shades for the furnishing elements. 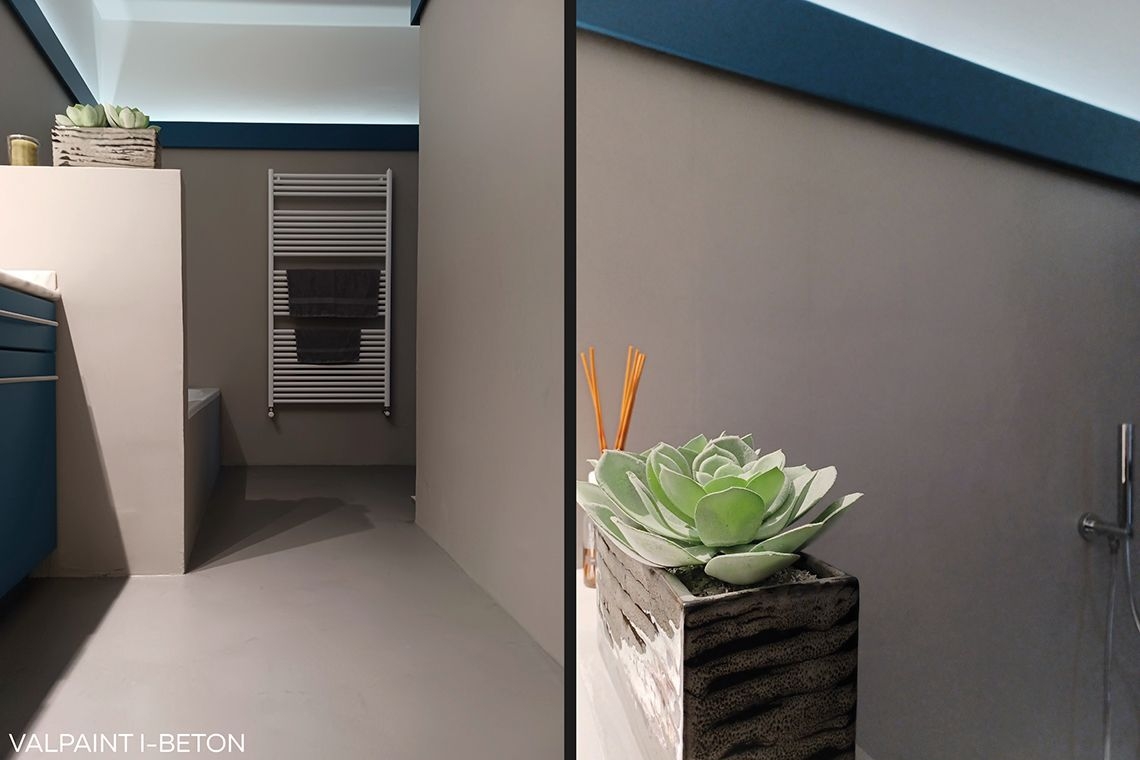 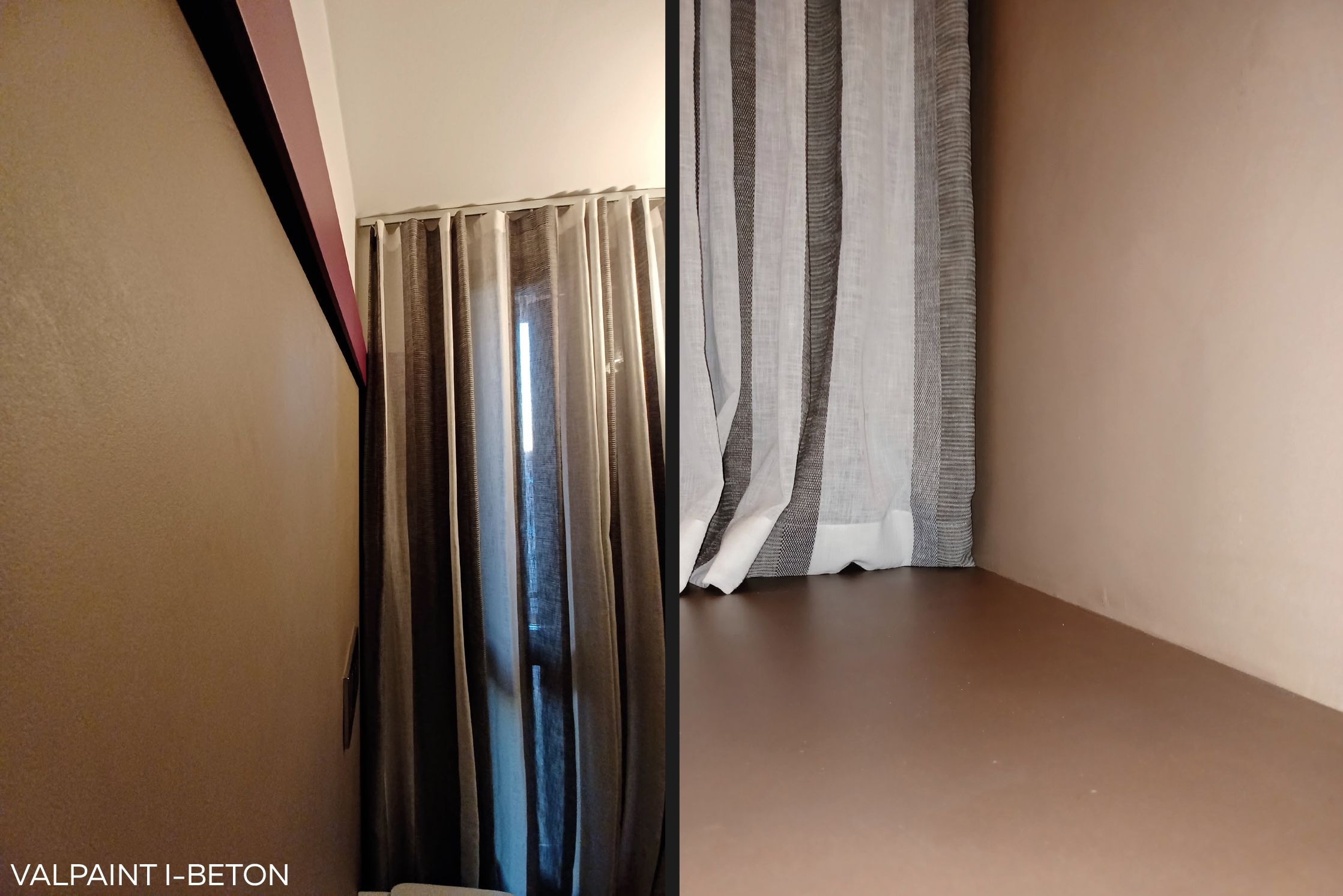